Tim is a trained and professional calligrapher and carries out a wide variety of lettering, both commissioned and personal work, traditional and contemporary in style. Examples of his work are in the Royal Collection, the Victoria and Albert Museum and the Fitzwilliam Museum, Cambridge.

A list of names of some of the victims of the Grenfell fire, commissioned by a community centre they attended, using images of rose windows and birds to give a message of hope.

A quotation from Thomas Campion's 'Booke of Ayres', in which he compares the lightness of song to gold leaves, depicted as an alchemical diagram.

A well-loved quotation written in Italic as a wedding present.

Salutation: the five words of greeting open the Second Epistle of St John. Gouache and gold on vellum, mounted on coloured paper with gilded plants relating to the adjacent words. Exhibited in York Minster in 2016.

All Art: a quotation from the 19th century art critic Walter Pater in which he compares the abstract qualities of art to music. Collection of the Fitzwilliam Museum, Cambridge

An illuminated broadsheet on the subject of Anne of Brittany, twice Queen of France, including her and her fiance/husbands' coats of arms and an old French nursery rhyme.

I AM. The words are those of Christ in St John's Gospel. Gouache, raised gold on gesso, gold leaf on gum ammoniac, and powdered gold, on paper. Exhibited at Lichfield Cathedral in 'Holy Writ', 2014, and in the Crafts Study Centre, Farnham in 2015.

The Five Sisters of York is a legend told in Dickens's novel Nicholas Nickleby, relating the origin of a stained glass window in York Minster. Gouache and gold on grey-brown paper. Exhibited in York Minster in 2016.

Opening from 'A Tale of Two Cities, by Charles Dickens. Gouache on paper. Originally planned as a demonstration piece for a calligraphic event at the Victoria and Albert Museum, the piece was subsequently commissioned and acquired by the V and A.

Inspired by Purcell's music for Dido and Aeneas and nautical imagery. Words by Nahum Tate. 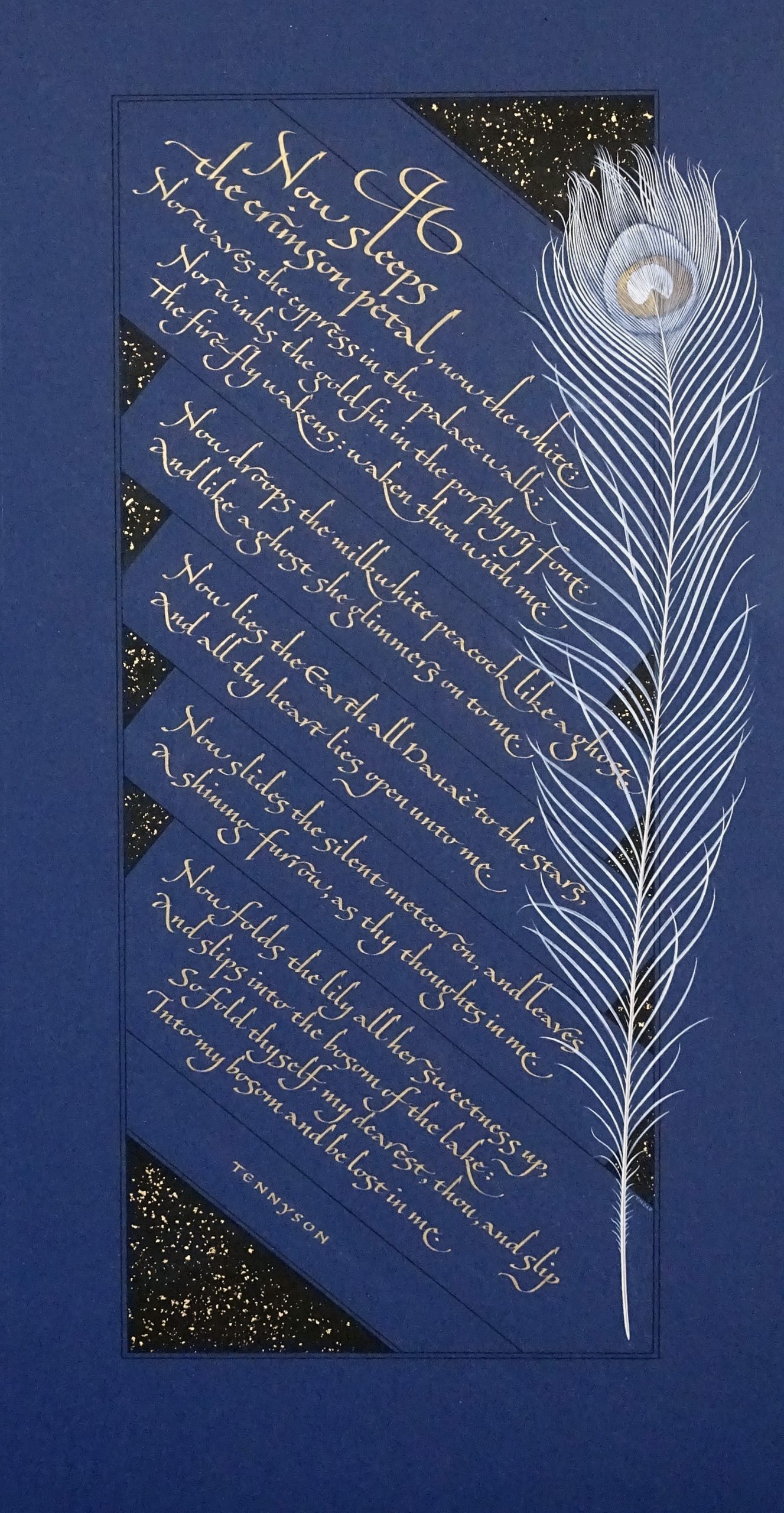 Now Sleeps the Crimson Petal, a sonnet by Tennyson, with layout and script inspired by Islamic calligraphy. 2020